This post contains affiliate links, which means if you buy something through those links I will receive a small commission at no extra cost to you. I will only recommend products that I love, and feel are valuable to you. Thank you for your support!

Even though I’m loving every product of Kylie Cosmetics, it was time to say goodbye to some of them. I’m going to tell you which products I’m talking about and then I’m going to explain why I decided to sell them or give them away. This is the list of products:

As you can see, I already sold 3 products. I’m still trying to sell 5 other products as well. The other products I’ve gifted to my mom since she really likes them. Let’s go into detail about why I’m selling them or gave them to my mom.

The reason why I decided to sell this baby is that I just didn’t grab it much. As you can see I only used like 2 colors, maybe 3 and barely touched any other color. Moreover, this was one of the first (I can’t remember if this was the first palette or the first palette this size at that time) palettes Kylie Cosmetics had.

Since eyeshadow palettes were pretty new to the brand, the quality wasn’t as good as it is now. The pigmentation is just a little less than it should be. Since I haven’t really used this palette, I thought I should try to sell it and eventually I sold it. I hope the new owner is going to use this palette more than I did!

The reason why I sold both of them is that I tried them on and they both looked horrible on me haha. Hazel made my teeth look yellow and gross, Libra made my lips disappear. I expected them to look cute when I bought them but nope haha. Since I tried them both once and never used them, I felt like I could at least try to sell them. Also, these two Lip Kits are sold, just like the Royal Peach palette. I’m happy that I could make other people happy with these Lip Kits.

Both these Lip Kits are super pretty but I just didn’t reach for them. Pumpkin also made my teeth look kinda yellow and Kristen looked way darker on me than I thought. Pumpkin was almost never used, so I’m trying to sell it right now. I have been using realized multiple times so I didn’t want to sell or donate it. Luckily my mom really likes shades like Kristen (red, pink, purple kinda colors are her faves!) so I gave Kristen to her.

After I realized peachy colors don’t suit me very well, I decided it was time to let go of my LA Lip Kit. Moreover, it’s very light and I don’t think that’ll look good on my skin tone. Party Girl is such an amazing color but I never wear these bright colors. I hope I can make someone happy with it who loves these type of colors!

Both these shades were a part of the Kylie Cosmetics Holiday Collection 2016. They came in a set of 4 shades. Blitzen is way too dark for me, so I would never grab it but my mom could easily pull this color off. Angel is a super pretty color, which I really like but my mom saw it and really wanted it so I gave it to her. I have way more lipsticks than my mom has so I can easily miss one haha.

My mom saw this blush in my drawer and she fell in love. Since I have a lot of blushes I just gave this one to her. The color is super pretty but my mom deserves it so I don’t mind giving it to her! Moreover, I think I have a pretty similar Kylie Cosmetics blush so I don’t miss X-Rated. You can tell she really loves using this blush!

To be honest, I think this is an item which I have trouble with selling because I really like the color but it’s just too glittery for me. Since I’m not really a party animal and I think it’s too much to wear to school or work, I’m trying to sell it. I wasn’t reaching for it and I hope I can make someone happy with it.

In this blog post, I’m going to focus on my Kylie Cosmetics Lip Kit organizer. Yes, I have a special little organizer for all my Lip Kits haha. Recently it became pretty messy so I thought it was time to organize. Moreover, I decided to make a little DIY project from it as well. I will show you in a second, but first the before pictures.

It’s a plastic organizer I got a while ago and it fits pretty much. But as you can see, it’s just a boring organizer and the drawers are pretty messy. The worst one is definitely the third drawer. Lately, it became a drawer where I just threw stuff in. It was time to organize this mess!

So this organizer stands right beside my window and I didn’t think about how it might discolor when the sun shines on it. This was kinda stupid from me and that’s why some of my Lip Kit packagings are discolored now. It’s not a huge problem, because the Lip Kits itself are still good and useful. But I thought I should think of something so this couldn’t happen again. So I came up with a little DIY project!

I had some marble foil, which I could stick to the sides. My plan was doing just one side (the window side) but I ended up liking it so much I decided to get all sides covered. I was so enthusiastic about how it looked, I thought why not put some on the front as well? Haha. So in the end, I covered all sides with marble foil and I think it looks super cute and way more luxurious! By the way, the top looks super dusty but that’s a reflection of the sparkles in the Kylie Cosmetics make-up bag lol.

So my little organizer looks pretty much new and is all ready for an organized inside as well!

The first two drawers weren’t that hard to organize. Anyway, I decided to put the Lip Kits on their sides so I can see the colors better. Moreover, it’s pretty easy to grab them and it could fit more Lip Kits this way. I tried to organize them from light to darker shades. I’ve put the mini’s I got from Kylie Cosmetics in these drawers instead of the third drawer.

The third drawer was the worst one haha. There are empty packagings in it, samples from Sephora, empty/dried out products. more samples, cards, etc. So I decided to put everything on my desk and just go through it.

First of all, I threw out all the empty packagings. There’s no need to keep them (alright, I kept some cute ones lol bad habit) and it already made more space. Then I decided to put the samples from Sephora at places I would actually use them (I do now and I discovered new favorite products!). Moreover, I threw some empty products in this drawer as well so it was time to throw them out. 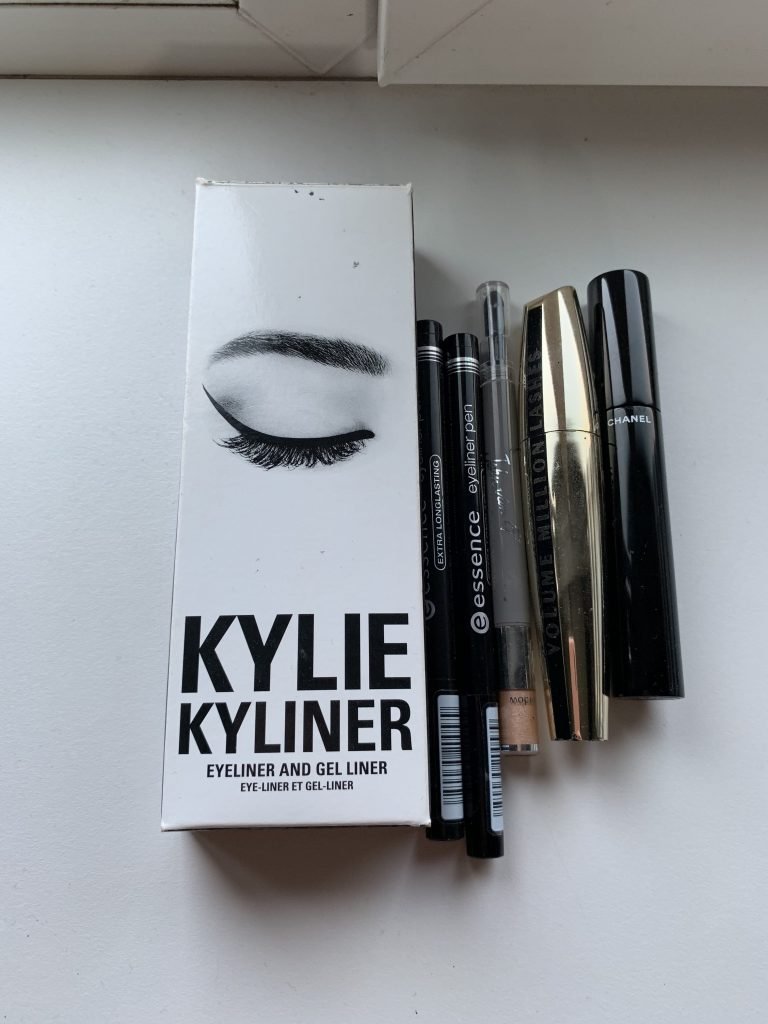 These are the products I’m throwing out! All of them are empty and so I had to get rid of them. Kylie’s Kyliner is one of my favorite products though and I’m sad that she isn’t selling the gel liner anymore. 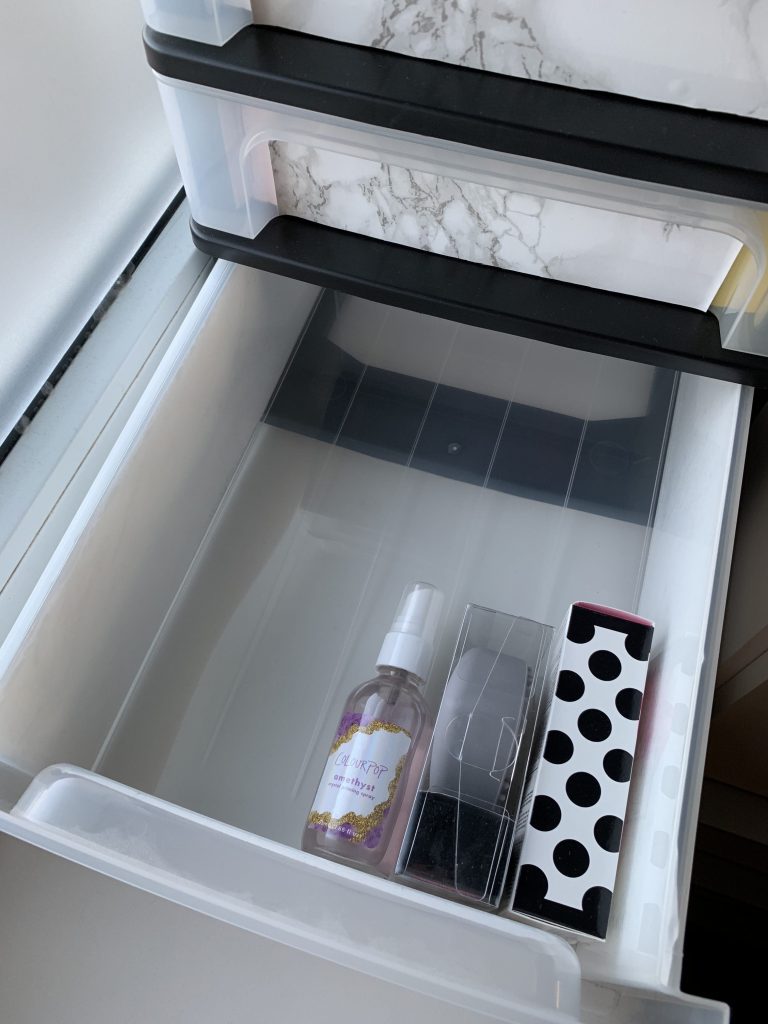 And this is how the drawer looks now!

I’ve made a change of plans haha. I’ve been using my Lip Kit drawer for a while this way but all of a sudden, I saw a better place to store my Lip Kits and so I could create space in this drawer for other products. I actually ended up storing my highlighter collection in these drawers! 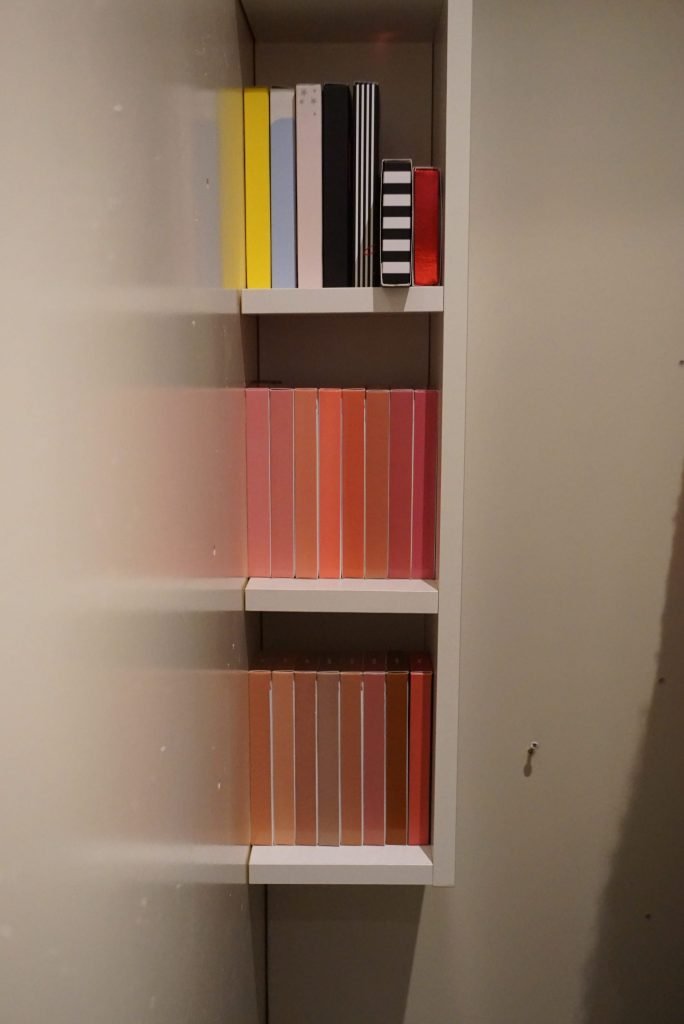 I have this Ikea thingy in my closet and first, it was filled with stuff I never use anymore. So I tried fitting my Lip Kits in there and I actually love how it looks! I can even put them on their sides to store more in one shelf but for now, I like this a lot. It’s very easy to get them and I can already see the color this way.

Shop your own Kylie Cosmetics Lip Kits over at her website.

It was nice to declutter my Kylie Cosmetics products. Even though I still have a lot of products, I’ve made room for new products. Plus I’m able to use my drawer for other products now which, in the end, works so nice. Lesson learned: don’t buy too orangy/peachy lipsticks, too light lipsticks or glittery highlighters haha.

Hope to see you next time loves,

THIS OR THAT 💄 Let’s play a fun game! You ha

I recently bought this @ctilburymakeup lipstick in

HEY YOU! When was the last time you cleaned your m

Dear lovely followers, I want to wish you all a ha

I hope you all had a great Christmas even though t

Marc Jacobs Beauty packaging is something else! I